A new race (only since 2015), Ben Gullipen is a rather runnable out-and-back race of 13.5kms with 350m of ascent. The route is entirely track (a lot of forest road – you could drive it in a car) and is certainly not my preferred surface. However, the weather at Callander was stunning – cool, sunny with a light northerly wind. I cannot remember when I last ran in the sun. So despite the rocky gnarly track of the first/final kms, this was a rather enjoyable jaunt. The views of Ben Ledi were amazing as its snowy cap gleamed in the sunshine. We ran the wrong hill!!! 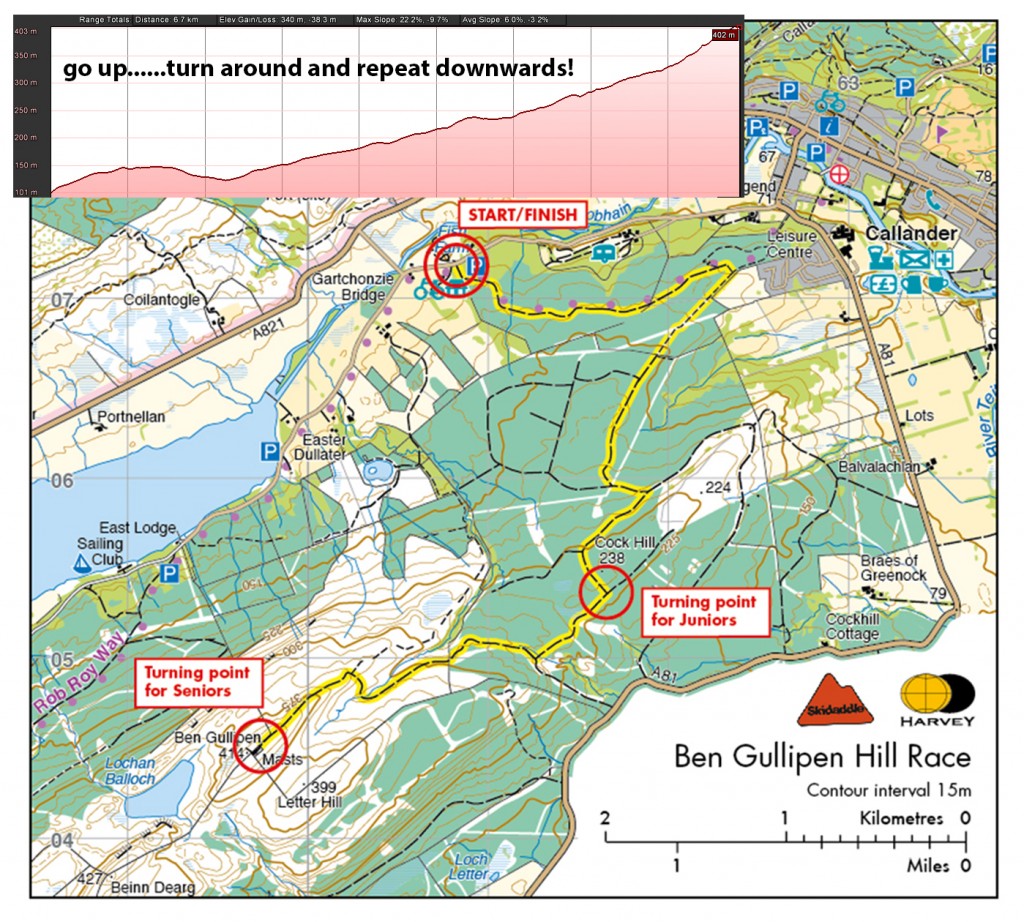 The race starts at the Wheels Cycling Centre near Callander and is an almost continuous climb for 6.7 kms. The gradient is not steep enough, except maybe the final 0.5 km, to justify NOT running, so it is a rather continuous gruelling ascent up through clear-cuts, spruce/larch/pine plantations and finally onto the open moorland of Ben Gullipen itself. Having said that, at only 13.5 kms, the race is shorter than my preferred distance so I felt pretty strong and continually battled with a Falkland Trail Runner (Lyle) all the way up, and all the way down. He just pipped me over the line!

While I went at a more leisurely pace – slightly regretting the leggings and 1 too many layers – Des and Stu battled all the way up. However, on the way down, Des had the upper hand and left the “poodle loving old duffer” in his wake. Peter however had the day and came in 3rd.

Great weather, but at £10 (£15 on the day), this is not a race that Stuart and I will come back to. This is a nice trail race, but there are better hill races which have less impact on recovering legs and more excitement.

Do I have my Mojo back? Hmmm – tricky to say, but it is certainly on the up.

Who is this guy? Obviously too early in the season for wasps!!!