The backstory – Alan (Gilly’s better half :-)) had a back operation and his place for the Spartan was up for grabs. After an online gurning contest between me and Yan, I won – obviously the ugliest – me that is!

It was only afterwards that I asked what the Spartan was. Apparently – a trail race obstacle race –  there is the Spartan Sprint (3-5 miles), Super (~8 miles) and the Beast at 12-14 miles. We were doing the Beast! Ugh!

Luckily, I was running with Gilly and Sadie, so when I would undoubtedly become undone, I knew I had some strong alpha females to drag me across the line!

This Spartan Beast was a ~20 km “fun” run hill/trail race through the southern Pentland Hills (starting/finishing at Spittal Farm). Oh – and there are some obstacles! I have no idea how many there were (30+?) – the semi-tortures of the day have muffled my mind into a muddy hazy mess.

Here is a rather schematic map of the route (I am sure Gilly can produce a better one from her fancy Garmin). Truth be told, it is not the route itself that adds on the miles, it all the switchpacks and running/stumbling/staggering in circles that pile up the distance. 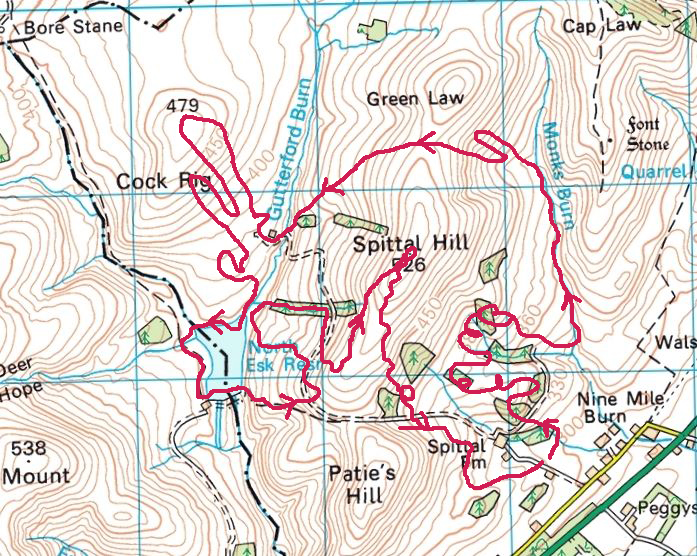 The Spartan Beast Route – sort of!

Here is an idea of the types of obstacles we had to go through – there were probably more, but I am sure you get the gist:

Wading through muddy pools, carrying sandbags (2 for guys and 1 for women – where’s that equality?), climbing walls (which got higher as the race went along), carrying logs ridiculous distances up and down steep muddy terrain (nightmare), crawling under barbed wire (never-ending – some electrified), carrying more logs up and down hills, climbing hoops and monkey bars, swimming and wading through parts of the North Esk Reservoir, throwing javelins at bales of hay, carrying buckets full of gravel (this was a xxxxxxx nightmare), breeze block dragging, tipping a caber (up and down slope!), horizontal wall traverse, more bloody logs, rope climb, and carrying a 50kg metal ball for 10 meters (epic fail for me – I had to go for the lighter girlie ball).

And if you do FAIL (or refuse to do) any of these, you have to do 30 burpees – basically a combo press-up and star jump.

And then between all of these obstacles – blissful running – I mean – blissful – one fully appreciates what a joy running is when your arms have popped out of their sockets a few times. I honestly think I might become a hill runner now :-).

A final thanks to both Gilly and Sadie for not getting too grumpy when I nearly broke their ankles. Moments of madness and puppy-like excitement – or it could have been the many many gels I consumed. I am still buuuuuuuuuuuuuuuuzzzzzzzzzing!!!!

Start – all clean and energetic

2 dirty girls and a happy man

I would have bulked my muscles more, but they had been left up on the hill