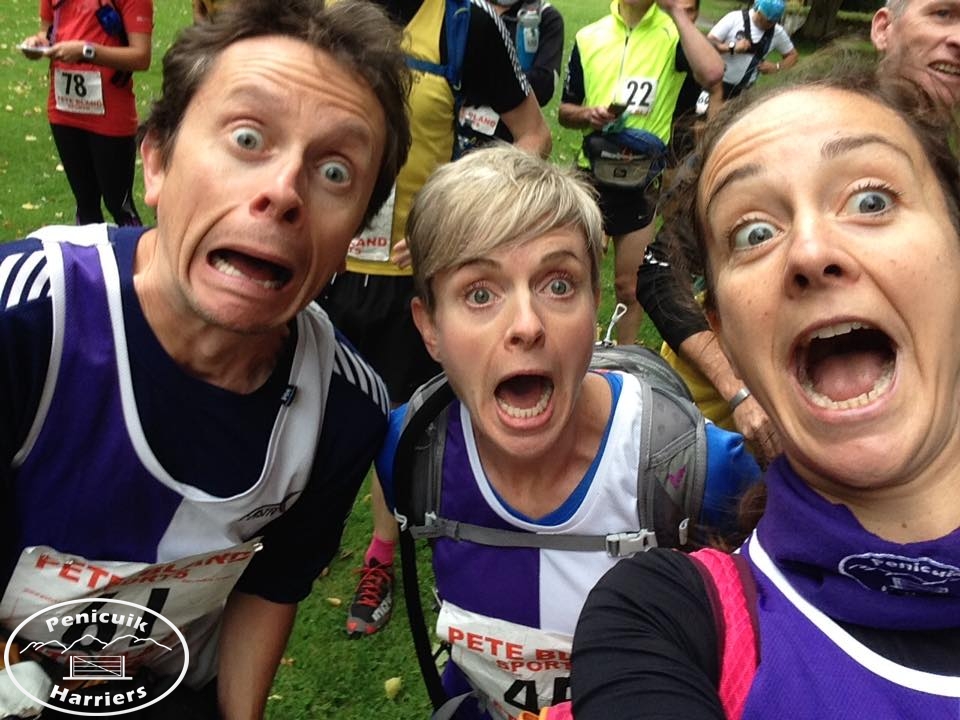 The Two Breweries is an 18-mile race between Traquair House (which has a brewery) and Broughton Brewery across some epic Borders countryside, including about 5000ft of climbing. It has a mix of forest trail, heathery hillsides, boggy track and grassy, tussocky slopes. Sounds lovely, huh? “Sign me up”, I said, thinking “It can’t be any more difficult than the Pentland Skyline”, which has a similar distance and ascent. How wrong was I? I have run a 50k ultra, the Loch Ness marathon and the Skyline, and this was by far the hardest, longest race I’ve ever done!

As usual, whenever I run a hill race, the weather was terrible (you’re definitely onto something there, Rob). High winds and rain, but mercifully mild. The start wasn’t too bad though and the sun even popped its head out of the clouds as we gathered at Traquair. Coffee, scones and a kit-check later, we (Rob, Gillian and I) set off on the charge up towards the main road from Traquair. Rob had described the route in detail before we set off, so we knew there was to be a mixture of terrain, with the sting in the tail of Trahenna hill to try and save energy for. The first section from Traquair to Glensax was innocuous enough, although the wind hit us on the approach to Birkscairn hill, where some hardy marshals were bivvied in, checking off numbers. The descent into Glensax Burn offered some welcome speed but the quads were complaining by the time I crossed the burn, as was Gillian’s knee. Across the river and first steep ascent of the race offered a chance to grab some food, and I struggled to eat an energy bar, already feeling a bit nauseous, 6 miles in.

After the climb out of Glensax (where I lost sight of Gillian who powered up the hill ahead of me) there was a horrendous bit of contouring around Hundleshope Heights towards Stob Law, which turned me onto the Samuel L Jackson of fell running. At least we were temporarily sheltered from the wind on this side of the hill, but this probably meant that runners behind me could hear my expletive-laden rant as my ankles struggled to grip the side of the hill. Another bunch of huddled marshals greeted me on Stob Law and I tried to smile and look forward to another bit of fast running down the hill towards Glenrath Farm. The descent was tough though and my legs were wobbly and sore. A water station at Glenrath gave me a chance to stop and down three cups of water (paranoid that my own hydration pack wasn’t going to last) while pondering the time. 10 miles in and already almost two and half hours. My 4:30 target was looking unrealistic at best! Especially as I took a wrong turn out of Glenrath and was only saved by someone yelling at me from back at the farm (thank you, thank you, whoever you were).

The next section was probably my favourite, with some good runnable terrain out of the woods after Whitelaw Hill, past the wonderfully named “Dead Wife’s Grave”. Soon Stobo Castle hove into view. I had been inside it only three weeks earlier being pampered, and it was hard not to want to go running up to the door and beg to be let in! But onto the next checkpoint it was, where my legs decided that they’d had enough and were going to complain and cramp for the remainder of the race. The run through Tarcreish Wood was a mixture of hobbling and running on hard-packed forest trail, trying to enjoy the shelter from the elements. About a mile along the trail the path turned down across the reservoir and towards the last leg – the approach and ascent of the dreaded Trahenna, shrouded in rain as it mocked me from afar.

The run across the valley towards Trahenna made me question my very existence. It was an epic scramble over wet, boggy, grassy, mossy, overgrown and untamed terrain. As I struggled to scramble my way towards the faint line of runners trudging up Trahenna, I wondered what the hell I was doing here, why I wasn’t at home in the warm and dry instead of battling the elements out there in the wilds of the Scottish Borders. Everything hurt from my eyeballs to my toes (which I could barely feel now as they were so cold and wet). After what seemed like forever, I reached the base of Trahenna. What followed next was like one of those nightmares where you’re running but going nowhere, with a LOT of swearing, until I caught sight of Chris Downie, like a knight in soaking wet waterproofs, shouting encouragement. It was so good to see a friendly face! Bless him for coming out in that godawful rain to support us. What a champ.

The route off Trahenna went over some horrible wee sheep trails, which brought out the worst swearing so far, and I tripped at least three times, knees banging together in the wind. Having done the Greenmantle Dash a few times I had been looking forward to the descent into Broughton, but my legs had other ideas. I got passed by at least five runners here, and I hobbled to the bottom to see Chris waiting again under some trees (how did he do that??).

Needless to say the last section through Broughton to the Brewery on the tarmac was horrible – a mixture of pain, nausea, hobbling and slow running. I was so disappointed in myself for taking so long and was worried Rob and Gillian would be fed up waiting for me. But it turns out Gillian was only a few minutes ahead, and we passed each other as I hobbled towards the finish line. After a wee cry on the walk back to the village hall, I pulled myself together and once in some warm, dry clothes, the nausea started to abate. Both Gillian and I had suffered nausea pretty bad, but Rob had had a good run, no cramp and although the elements pushed him 15 minutes behind his PB, it wasn’t his slowest effort. Kudos to both Rob and Gillian for then making it out to the Harriers night out afterwards. I was a broken woman! 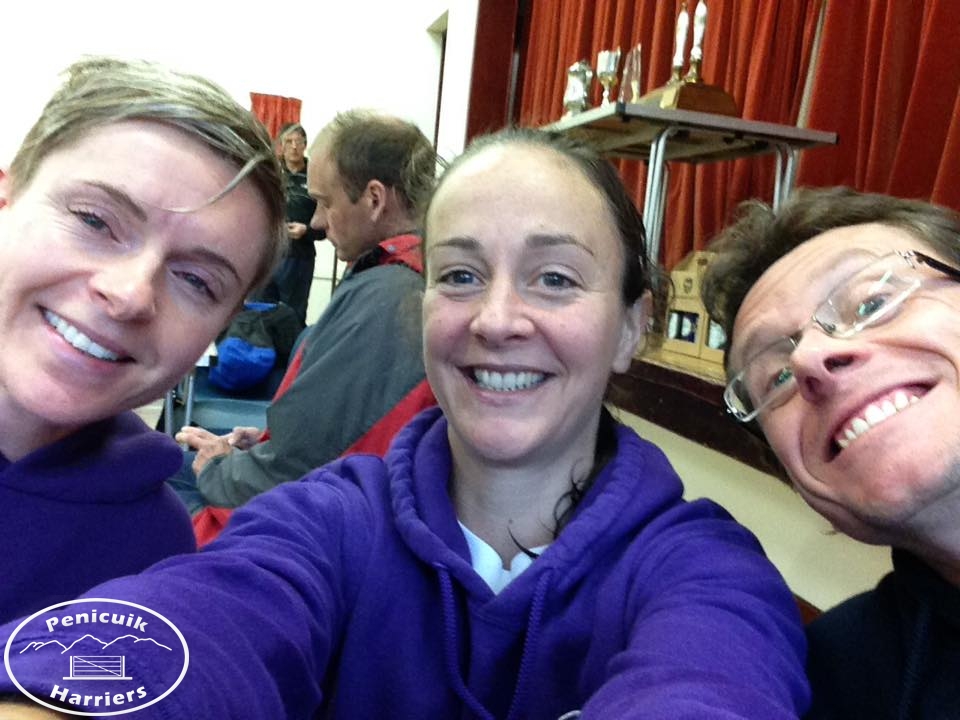