Gilly took us all to Broughton in her 4×4, then we piled into the coaches to Traquair. The cafe there opened at 11 so people were anxiously queueing for their scones and coffee before the kit check. 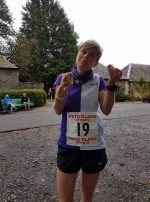 Having run this race a couple of years ago I knew I was in for a challenge. Michael and I had ran the route with Rob and Gregor a couple of weeks before so I hoped that would stand us in good stead, but I knew there were a few pathless sections. I was a bit nervous and as the organisers had said it was fine to use gps I set my watch to show the route I had downloaded so I would have that to fall back on. With it being such a testing course I didn’t want to do any extra miles, unfortunately the cloud was thick and low over the hills so a few runners came a cropper. For me it was just after checkpoint 1 Birkscairn Hill where me and several runners continued along a path when we should have cut off to the left. I had the route on my garmin and it beeped to say I was going off course but I decided to stick to the other runners instead. As soon as I came out of the cloud I looked over and could see runners heading up the hill to my left, past Glensax. I shouted to the other runners we were going the wrong way, then proceeded to make my way down the hill cutting back towards the old farmhouse by the river. There was no path and I was cursing myself for not trusting my gps as I bounded down the heather in a most undignified way.
It was good to be able to see where I was going but as we gained more height we entered the cloud again. As I got to the checkpoint at Hundleshope Heights I was told I was just on the cutoff, so I got my head down and pushed on. This time I decided to trust the watch and this paid dividends for me. There were a few runners following me now, they were saying ‘can you see anyone up ahead?’ I was not enjoying having the responsibility of people following me when I was so unsure myself. I carried on and as we contoured the hill and came back out of the cloud I saw runners coming down above me, I had taken a better line and felt I had clawed back a few places after going wrong earlier. I really need to work on my navigational skills but I was glad I had my watch to help and I clearly wasn’t the only one who had hoped to follow the crowd.
On the way to Glenrath Farm there was Chris Downie out on the hill, he said he had seen Duncan, Gillian and Jan, but when I asked about Michael and he said he hadn’t seen him I started to worry a bit, after a restoring hug from Mr Downie I was on my way again. When I got to Glenrath Farm and stopped to fill my water bottle Jan called my name, she was in the capable hands of Moffat mountain rescue. Her knee had been playing up and she had decided very sensibly not to do it any more damage by continuing, we had a brief chat and she said she would be at the village hall later. Just after this I spoke to a Carnethy runner who said he had had a few navigational issues too. The field had thinned out considerably and I ran most of the second half of the race pretty much alone. I feel more confident on this section as it’s more straightforward so I didn’t mind.
As I came down Whitelaw Hill and saw Stobo in the distance I met a runner who was rolling around on the ground retching. I offered him a drink which he declined and I checked he was OK before heading off, this race really is brutal! Once I got past the entrance for Stobo and headed up the track I needed my watch again as I was a bit unsure which track to take, as I wandered up each one trying to find the right line Michael appeared behind me looking rather bedraggled but still in good spirits. I was really happy to see him and he told me how he had gone wrong after checkpoint 2 and ended up with another runner on completely the wrong hill, they spoke to a walker who confirmed where they were (Glenrath Heights) and they managed to work out how to get back to the race route. They had realised they were going wrong when they noticed there were no footprints on the path they were on. The unmistakable tread left by hill shoes was absent in the mud. This detour had added considerable time and distance to what was already Michael’s longest race yet.
He had some crisps while we headed up the track then off he went in front towards Trahenna. I kept him in my sights for most of the rest of the race and willed him on. On Trahenna I met the guy from Carnethy and he said ‘How many times am I going to get lost in one race?’ so we weren’t the only ones who had problems. Before long we were headed down Greenmantle hill, I slipped on my bum at this point but knowing I was nearing the finish wasn’t bothered by it. I was so glad to finally get to the end, about a quarter of an hour longer than it took me last time. The navigation and the fact it was a bit muddier this year had affected me. Gillian smashed her previous time by about half an hour though. As Michael and I walked along to the village hall we met Gilly, smiling and looking fresh as ever on her way to Broughton brewery.