A Facebook post about the landscape of Bulgaria from the mother of my PhD student, Ivet, put the thought in my mind “might there be a mountain marathon I could enter as an excuse to visit to visit this country I’d heard so much about!”. Thus I found out about the Pancharevo Trail Maratho 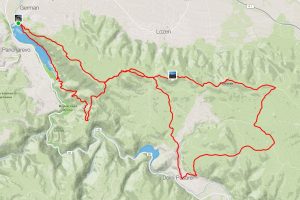 n and, ten days into a great two-week trip to Bulgaria, was on the start line of the race – with Ivet running the half marathon. Although it was only April, and the race started at 09:00, the weather was forecast to be as warm as I’d feared (28C at 16:00). My plan was to run hard for the first ten kilometres so that I could get as far round the course as I could before it got too hot! It begins with 3km on a tarmac cycleway beside Pancharevo Lake, and 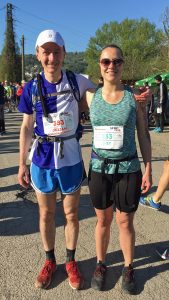 I covered these in less than 14 minutes before entering the forest for a steady 8km climb from 600m to 1140m. By then, half the route was in open country, with extensive views of Vitosha – the snow-topped 2300m peak above Sofia which my wife and I had walked up earlier in the week – and the more distant Rila mountains which reach almost 3000m. A gentle descent took us down to a col (1050m) where the half marathon runners double-back. I was glad of the second refreshment station to keep myself hydrated without using up too much of the 1.5 litres on my back. Indeed, the six well-placed refreshment stations were welcoming both morally and nutritionally. We were 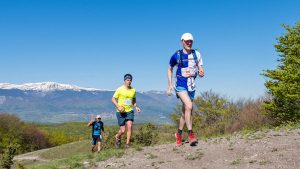 then faced with a stiff climb and, even walking, I started to get warm, and then hot. The route goes over three tops, with about 50-100m climb for each, and at the first it passes close to the edge of a big drop, so I took two minutes out to take some photos and cool a little! At the final top, the highest point of the route at 1182m, we were given a “Pancharevo” wrist band to prove we’d got there. I picked up speed on the descent, but was limited by the roughness of the trail. After the 21km refreshment stop, the route undulates and, with 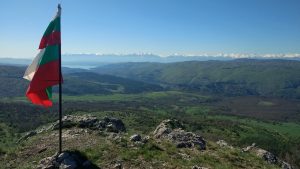 no-one around me, I started to wonder whether I was on the right track! [Ivet and I had done a recce of half the course the week before, but this section was new to me.] Although I should have been able to run harder, not being sure I was going the right way dampened my enthusiasm. It was also rather warm! Eventually the route turned downhill again, and I ran well into the village of Dolni Pasarel which, 28km into the race, was its low point (720m). We’d co

me down to Dolni Pasarel on the recce, so I knew where to leave the village. I also knew that it would be a long climb back up to the col (1050m) I’d passed through earlier. I managed to run bits of it which were not climbing, but it all felt very slow. I was steadily overtaken by a couple of young women – who were chatting all the way – and another guy, but I also picked up a place. From the col (34km) there was an undulating section I knew, and I could run its shady and downhill stretches. However, I was “Garmin-watching”, looking forward to the last 6.5 km which drops steadily from 1150m to the finish at 600m. By now my feet were killing me, with the thick skin under both big toes and one heel having separated and “shifted”, and I cursed every time a bruised toe hit something – for the trail was fa 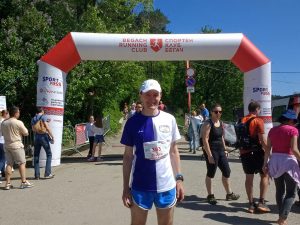 r from smooth. As the track steepened and went into the forest I sped up, but could feel the temperature rise as I descended and worked for pace. I wasn’t catching the guy about 100m ahead of me, and thought I had no danger from behind, until I head footsteps in the last kilometre. By now I could see through the trees to the lake, which getting nearer below me as I descended. I sped up and was going flat out as I reached the last 50m back on the tarmac track and flew through the finish into an area bustling with people. Fortunately I managed not to hit anyone before I could bring myself to a halt. I’d held off the woman behind me by 9 seconds, only to find out later that her chip time was faster! At the finish there was a great atmosphere, partly because there was a free, quality, craft beer for every finisher. Mine soon went down, and when I found Ivet, her parents and twin school friends (who had also done the half) in an open-air bar, I was immediately provided with another beer by her dad! It was a great way to relax as the twins also spoke perfect English. Ivet had taken 2:47 for the half which was the same time as I’d taken for the extra 21km loop she hadn’t done. I’d done the half marathon course 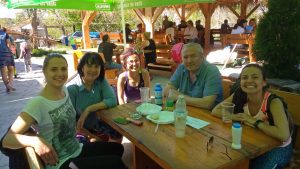 in 2:14, indicative of my fast start and its easier terrain. Thankfully the Bulgarians had data on their phones, so could follow the excellent on-line results service. With a time of 5:02, I was first Brit (of 3), first M50 (of 5) and, overall 26/137, so was satisfied. Taking the photos might have cost me a sub-5 hour time, but I was on holiday. The running standard in Bulgaria isn’t what it is here, particularly at the older end of the scale, as measured by my placing of 2/49 for runners over 40. Although an impressive-looking young woman was first in 4:16 [the men’s winner took 3:51], women’s running also doesn’t appear to be strong. Indeed, Ivet [a judoka by sport] came 10/25 for women in the half, but only 84/127 overall.

All in all, it’s a well organised race through beautiful countryside with a great atmosphere. The organising club, Begach, arranged for photos to be taken professionally, and then put them up on Facebook rather than selling them! I definitely recommend it as a “running holiday”, particularly as race entries, flights, accommodation, food, and beer are all cheap and good in Bulgaria! I’m keen to go back next year: anyone up for it?