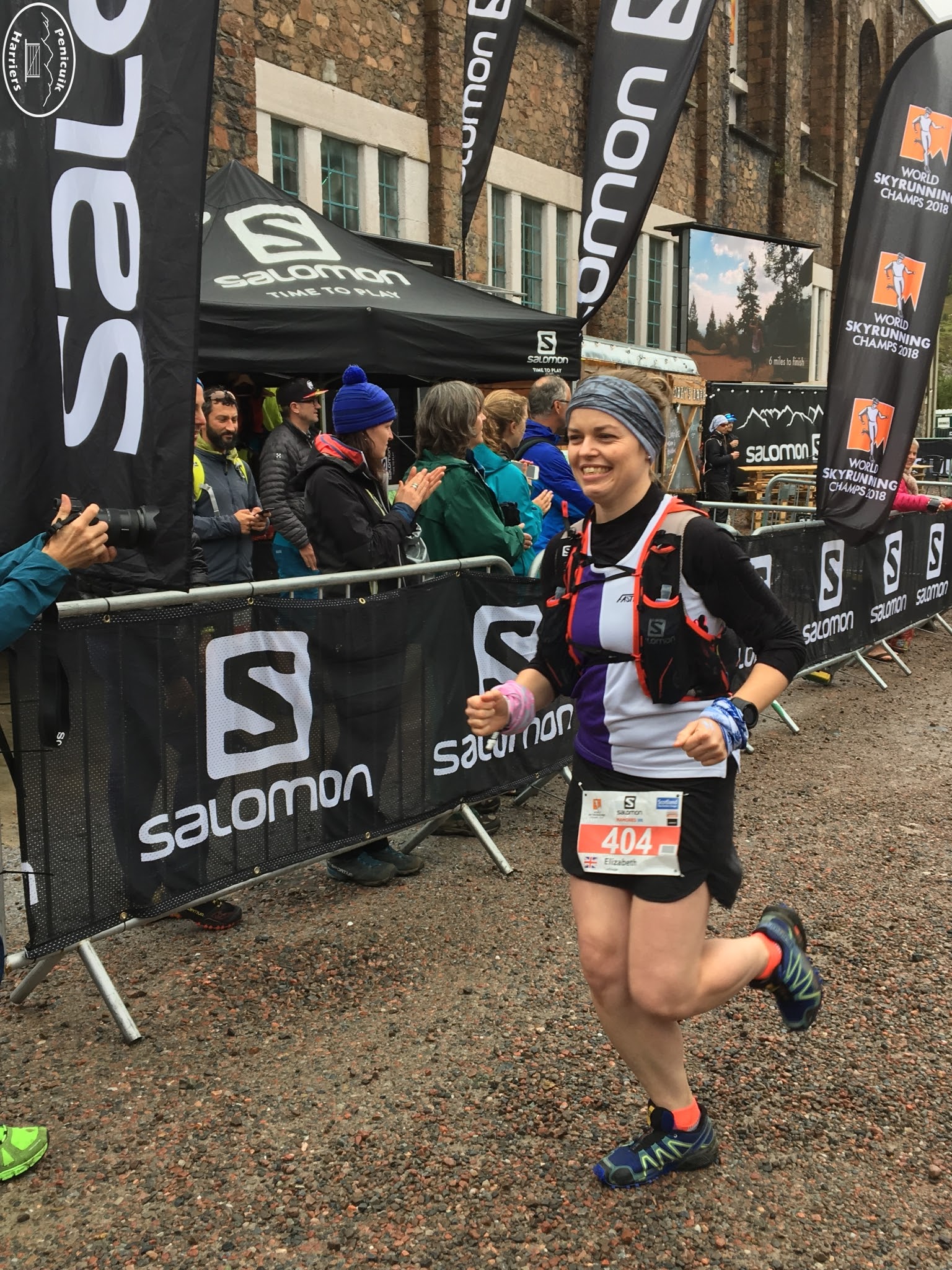 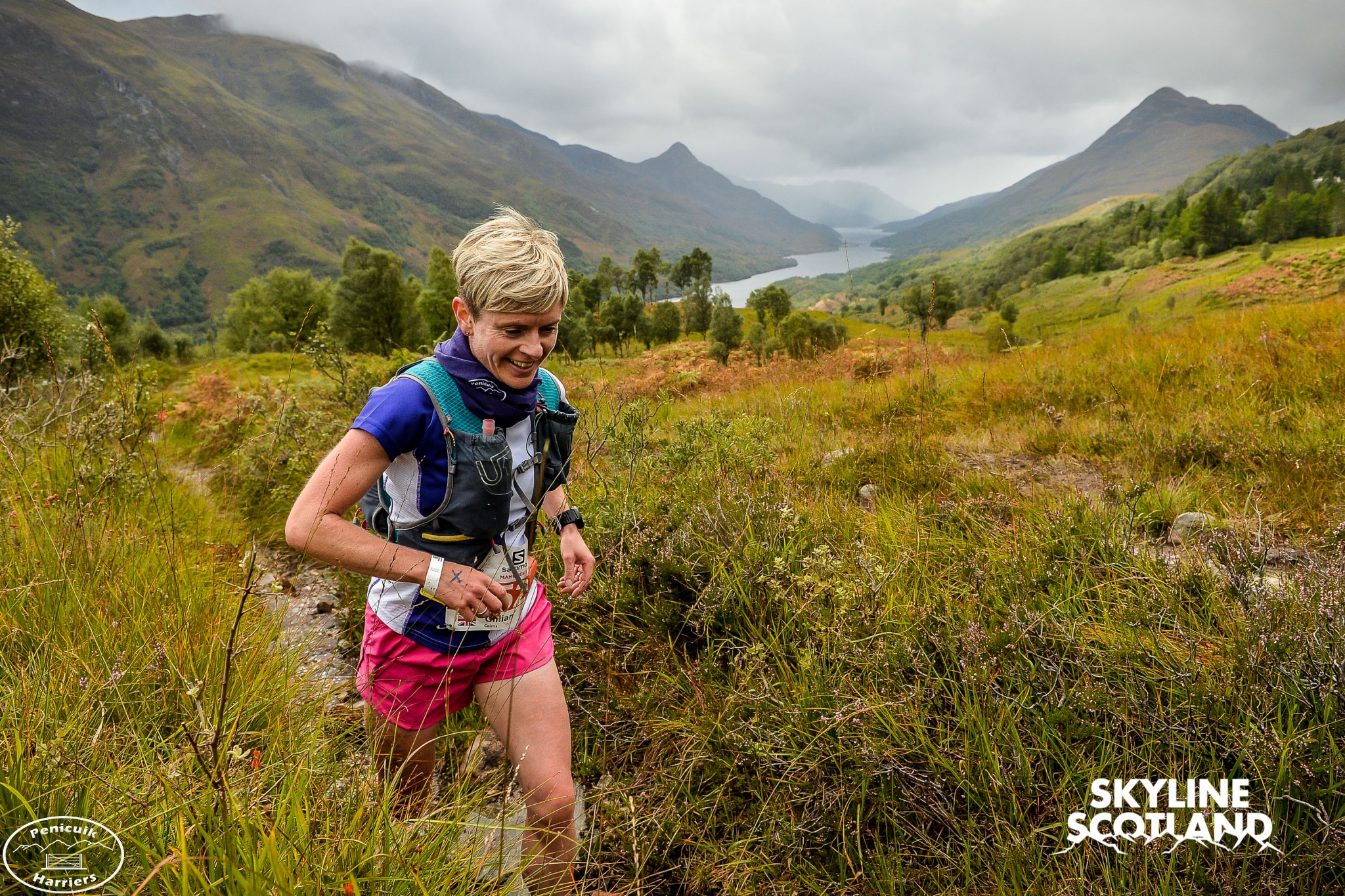 Ellie did this amazing run two years ago, and since then I had been considering entering as it sounded like a brilliant event to be a part of. So early this year I decided to go for it – for anyone who hasn’t noticed, I do love an  uphill, and what’s not to love about a day off work to run in that part of Scotland! I did consider entering the Ring of Steall race as well but that moment of madness passed. Next year :-).

The Momores VK follows the International Skyrunning Federation format of following a marked course gaining 1000m of elevation in less than 5 kilometres, with runners setting off at timed intervals. This meant climbing the munro Na Gruagaichean as fast as possible and then making our way back down pretty much the same route (steeeep!). Ellie also decided to go for it again this year, so much kudos to her doing this and fitting in training so soon after having her little girl!! The VK was the first race of a weekend of racing, finishing with the mighty Glencoe Skyline on the Sunday. International runners flock to Kinlochleven for these races, which makes it all very exciting for us mere mortals.

The day of the VK arrived, as did a forecast for some pretty changeable weather. It was a slow drive up through Glencoe and the hills were shrouded in mist. I arrived and managed to catch up with Ellie and her two friends at registration in the Ice Factor. Kit check was very strict – they were checking the level of waterproofing on trousers etc, and given the conditions over the weekend I can see why! Ellie was setting off just after 2pm, so I got to cheer her and her buddies off, and then had a full hour to sit and contemplate the madness ahead. I met a couple of HBT ladies too, who were doing this for the first time as well and it was good to see some familiar friendly faces. At 3:03 it was my turn, and at this point the weather was thankfully reasonable.

The run to the start of the climb was lovely trail with some little streams to cross and a bit of mud, but all very runnable. Of course, a VK doesn’t stay runnable for long, and the climb after this was relentless. The route is marked straight up with little red flags, and involved plenty of using the hands to grab tussocks of grass / heather and later the slithery rocks. I can say that I hugely enjoyed about three quarters of the climb, but the  deteriorating weather made the last traverse to the summit anything but pleasant. I had to wrestle into my waterproof jacket and shortly after met Ellie on her descent. The rain, wind and mist on the ridge made it so difficult to see and to avoid bumping into runners heading down again and it was such a relief to get to the marshals on the top. Once there, you plug your clever timing do-dah into a device which reads your time. The temperature up there was low and with the rain and the wind chill, we needed our full waterproof body cover – the problem was trying to put kit on with completely numb hands. Folk were helping each other with sleeves, gloves etc, and it would have been comical if we hadn’t all felt close to hypothermic!

The ‘run’ back down passed in a blur. I have never been that cold on a hill and it was a little scary until further down and when some feeling came back to my hands and feet. Runners were still setting off and I really felt for them heading to the summit in the awful weather. All we could do was cheer them on and marvel at how speedy some of them were! Worth mentioning that the organisers moved to the ‘bad weather route’ for both the Ben Nevis Ultra and the Glencoe Skyline. They took a bit of stick for this from some runners on the online forum but given that there were a number of runners treated for hypothermia at the VK and the severe weather forecast for those days…..seemed sensible to most folks!

By the time I reached registration to hand in my timing device I had recovered and was already thinking about next year. The marshals on the route were all amazing and were so encouraging, the organisation of the event is extremely slick, and there is a great atmosphere to it all. I’d love to manage the RoS race and to stay up there for the  full weekend to see the elite skyline runners!